The Heathcote Lions Club’s direct support for the O’Keefe Rail Trail took a large step forward on Friday 15th May, for the club’s funded new Rail Trail Pavilion for Heathcote. The day was marked by a contractor’s equipment preparing the site for building construction.

The Herriott Street site will be transformed over the coming weeks, as the new structure rises up beside the rail trail and its new car park. Being constructed of Box Ironbark timber, the timber is being locally sourced, milled and fashioned by timber craftsman Joe McMahon. “This building will be admired by the local community and trail users, for its uniqueness and rich quality.” said Lions Club President Daryl Dedman. “There will also be a connection with the former railway, which once transported so much of the same type of local timber for firewood in Melbourne and for the mining industry in Bendigo.”

President of Friends of the Bendigo-Kilmore Rail Trail group, Garry Long, welcomed this commitment of the Lions Club of Heathcote. “This is a club that the local community is very proud of, as it invests much effort and funds into improving Heathcote’s many facilities.” said Mr Long.

With the total construction time expected to be six weeks, Daryl and club members are looking forward to seeing the result benefiting local walkers and cyclists plus trail related visitors to Heathcote.

How to make a local trail, directly networked to the O’Keefe Rail Trail in North Bendigo, a whole lot safer? Thanks to the efforts of the City of Greater Bendigo staff and Councillors, the Bendigo Creek Trail has recently been re-routed under the High Street bridge plus the trail approaches upgraded in Golden Square. 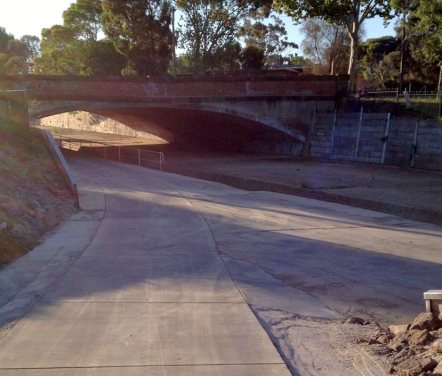 Not only have these works eliminated a dangerous high risk crossing of High Street, with minimal vision distance for all users, it will benefit and encourage more local cycle commuters riding to work. This popular trail will also now provide cycling and walking tourists in Bendigo with a much safer experience to talk about.

Congratulations to the City of Greater Bendigo, for listening and eliminating this dangerous crossing. The cycling community now looks forward to Council and State Government addressing the Bendigo Creek Trail’s number one safety hazard and impediment, that being the crossing of the Charing Cross-Alexander Fountain area in the Bendigo CBD.

The 2014 Victorian State elections have resulted in a change of government, with the new Premier Daniel Andrews and his government ministers taking the oath of office in front of Governor Alex Chernov at Government House.

History was also made with the first member for the new seat of Euroa, Nationals candidate Stephanie Ryan being elected. At age 28 years, Stephanie has also been elected as the Nationals new deputy leader.

Jacinta Allan MLA was returned as the member for Bendigo East, with the added responsibility in the new government as the Minister for Public Transport and Employment.

In the lead up to the 29th November election, both Stephanie Ryan (News article) and Jacinta Allan both supported the proposal for the Heathcote to Wallan rail trail. Ms Allan together with Clare Malcolm, the then Labor candidate for Euroa, announced on 22 November (News article) that the Labor Party would be committed to fund a $150,000 feasibility study for this rail trail proposal if elected to government.

The community, along with the Mitchell Shire Council and the City of Greater Bendigo Council, now look forward to the new Victorian government honouring this pre election commitment, to enable a feasibility study into this Victorian trail network linking rail trail to commence in early 2015.

The North Central News story (page 3, 18th November 2014 edition), reported on an election commitment for the proposed Wallan to Heathcote Rail Trail, in lead up to the 2014 Victorian State elections on 29th November. Labor candidate for Euroa, Clare Malcom was joined by Shadow Minister for Regional and Rural Development Jacinta Allan at Pyalong, to announce the election promise.

The announced commitment was to fund a feasibility study for the proposed Wallan to Heathcote Rail Trail, and this trail forming a network of linked trails in regional Victoria.

Could Mitchell Shire become Victoria’s rail trail hub? That is the focus of an article in Mitchell Shire Council’s Winter News. The Mitchell Shire will be looking to the State Government for funding, which would enable a feasibility study to be conducting into the proposed Wallan-Wandong to Heathcote Rail Trail. 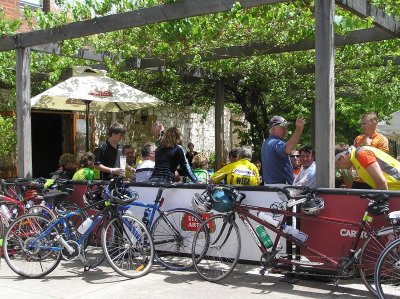 While the recently completed Gippsland Plans Rail Trail finally has connection to V/Line passenger train service at both trail heads, the proposed Wallan to Heathcote Rail Trail could provide more opportunities for Victoria.

With a Wallan to Heathcote Rail Trail linked with the O’Keefe Rail Trail, this rail trail combination would be the only Victorian long distance 100+km (being approx 120kms) with passenger train services plus main road freeways at its trail heads. This is exactly what major national and international trail related tourist companies seek. And not only would both these trails be interconnected, they could be linked with the Great Victorian Rail Trail, the Murchison to Rushworth Rail Trail, the Bendigo Bushland Trail, the Bendigo Creek Trail, the Goldfields Track Victoria and more! A network of regional trails!

Could the Craigieburn Bypass Trail (metro Melbourne trail network) be connected to Wallan, and a regional trail network? Now this would create a new ‘gold rush’ for regional Victoria!

Between November 2011 and June 2013, the Office for the Community Sector, in partnership with Small Business Victoria and the Small Business Mentoring Service, delivered the Business Planning for Not for Profit Program.

This business planning and mentoring helped the Friends of the Bendigo-Kilmore Rail Trail to operate more efficiently, increase membership, and work towards achieving future major goals.

One such future major goal of the Friends group is to have a Wallan to Heathcote Rail Trail created. This trail would not only link with the O’Keefe Rail Trail plus a number of other trails in regional Victoria, it could also link those trails directly into the Melbourne metropolitan trail network.

With the current cooperation of the Mitchell Shire Council and the City of Greater Bendigo Council, plus possible funding support from the Victorian State Government and the Federal Government, this proposal could become a reality for the benefit of regional communities and businesses.

Click here to read and view more about this case study and that Business Planning for Not for Profit Program.

A milestone is reached!

2 Comments Posted by bendigokilmore on Jul 3, 2014

This date also marked the 21st anniversary of the commencement for the initial trail project, to build the then unnamed off-road trail utilising a former railway line reserve. This was a ground breaking project by the former Strathfieldsaye Shire Council, the State Government, and the Federal Government (via an unemployment scheme). It would also be one of the very first (within the first three it is believed) such trails in Australia, to become known as a rail trails. (The O’Keefe Rail Trail history)

Fast forward to 2010-2014, this current jointly funded State Government and City of Greater Bendigo Council project has enabled the third stage of development for the O’Keefe Rail Trail to be undertaken. It is expected that this current project will extend the trail’s distance to approximately 50kms overall, and be completed by early 2015.

Another community driven proposal, by Mitchell Bicycle User Group and Friends of the Bendigo-Kilmore Rail Trail, has the goal of creating a significant long distance off-road trail in central Victoria. A Wallan-Wandong to Heathcote Rail Trail directly networked with other off-road trails, like the Craigeburn Bypass Trail, would be approx 150+kms in total (networked). This vision would incorporate the O’Keefe Rail Trail, and links to other off-road trails, connecting Melbourne via Kilmore with Bendigo, similar to what the original railway line did when it opened in 1890!

Community expectations, and rail trails development, continues to build Victoria as the tracks and trails state of Australia. 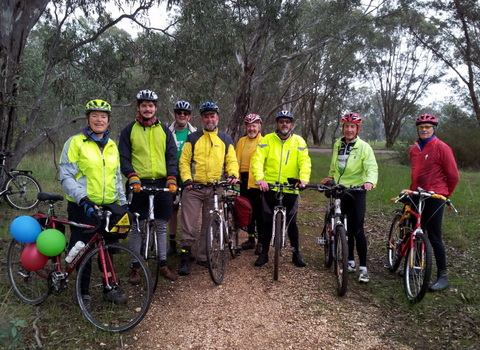 The benefits of rail trails and what they actually do for regional economies is what Deputy Premier Peter Ryan and National candidate for Euroa Stephanie Ryan both understand very well. Mitchell Bicycle User Group and the Friends of the Bendigo-Kilmore Rail Trail representatives met with Peter and Stephanie on 21 May, specifically to seek their support for the Wallan to Heathcote Rail Trail proposal.

This interlinking trail proposal is unique, in that it is planned not only to connect the whole of Melbourne’s trail network directly into regional Victoria, this trail will also connect a number of existing ‘stand alone’ rail trails to form a significant network of rail trails across Victoria. Peter and Stephanie were impressed with the work that had gone into the proposal, understood the ease of public transport connections, and both expressed their support for the concept.

Seeking Nationals support for the Wallan-Wandong to Heathcote Rail Trail

With financial commitments made by the Mitchell Shire Council and the City of Greater Bendigo Council for a feasibility study, the community awaits a commitment from the Victorian State Government. It is viewed that the Wallan to Heathcote Rail Trail proposal will emerge as an important popular tourism and recreational asset for Victoria. The trail network will also provide a much needed economic boost for a number of regional communities.

We’re on the way to Heathcote!

The O’Keefe rail trail will extend all the way to Heathcote within three years with funding for the development announced in Bendigo yesterday, by Minister for Regional and Rural Development, Jacinta Allan. The State Government is providing $1.9 million and the City of Greater Bendigo $1.3 million over the next three years. It’s been fantastic to see state and local government get together on a project like this. We’re tremendously excited and now the real action starts!

The Friends have many people to thank in getting the project to this stage, not least our Convenor Garry Long, who’s put in many, many hours so far. There have also been a veritable crowd of others including:

Thank you everyone. Now the hard work starts in earnest.

If you’d like to get involved, our next meeting will be on Thursday 22 July at 7.00 pm. Drop us a note on our contact page and we’ll give you details.