Living the History and in the Environment

There are a nine former railway station, platforms and siding sites along the length of the trail, each of which have been formally identified by a replica turn-of-the-20th century VR station name board. These name boards denote where each of the former stations were once located, and were installed by a Friends of the Bendigo-Kilmore Rail Trail’s community project. 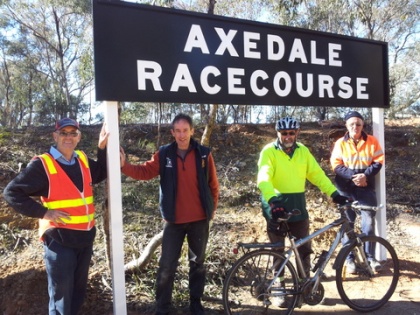 Replica concrete VR railway marker posts (mileposts) have been ‘planted’ along the O’Keefe Rail Trail, between Heathcote and Bendigo, to replace the missing original posts. The manufacturing and the installation of these mileposts has been a Friends of the Bendigo-Kilmore Rail Trail’s project, and can easily be seen with their destinctive black numbers on the white concrete post.

There are wildflowers to experience, including orchids, wattles and eucalypts in bloom during Spring along the trail reserve and also in the Bendigo Field Naturalists Club’s Bennetts Rd Nature Reserve adjacent to the trail at Bennetts Road Junortoun.

There is also the Knul-doorong Woodland Reserve adjacent the trail and Binks Rd Junortoun, a natural environment easily accessible from the rail trail. This also has a small water dam, with a ‘contimplating’ seat adjacent, located within the reserve. Adjacent to the south of this reserve is the Honeyeater Bushland Reserve, which was once used as a mineral extraction quarry. Extensive rehabilitation work has been carried in this reserve during 2021, with earth works to stabilise the dam wall, pathways and the planting of trees, by the Junortoun Community Action Group.

The Junortoun Flora Reserve is the former Strathfieldsaye Railway Station site, an area that has been affected by soil erosion section from previous activities. Elements of the former station’s roadways can be identified, plus natural treed areas are all at the corner of Wilkie Rd and Trotting Tce.