Rusting away for decades at the Korumburra Railway Station yards, one HY/GY railway wagon was fortunate to be ‘rescued’ by the Friends of the Bendigo-Kilmore Rail Trail community group! Being one of a total of 6320 of its type manufactured for Victorian Railways, after many years of service carrying basically any freight that would fit, this wagon (GY16625R) was taken out of service in 1998 and survived being scrapped. 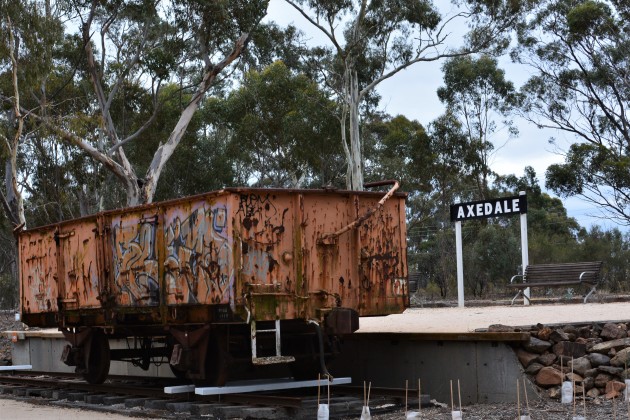 With the assistance of a Fosterville Gold Mine community grant enabling the 9-ton wagon to be transported from Korumburra to Axedale in Mar 2018, the private company BRW (Bendigo Railway Workshops) was contracted in late 2019 to repair and repaint it in its original ‘Wagon Red’ scheme. Being transported to the former VR North Bendigo Railway Workshops, this was where that wagon was originally manufactured (as HY16625) in 1956. With this work completed by March 2020, the wagon was then transported back to the Friends group’s O’Keefe Rail Trail’s recreated ‘Axedale Station’ onto their laid section of track.

The project’s next stage was to provide all abilities access for the public into the wagon’s internal area, where freight was once carried. With the new ramp manufactured and installed just prior to a relaxation of COVID19 restrictions, an official opening by City of Greater of Bendigo Mayor Cr Margaret O’Rourke was able to take place on Sunday 20 Sept being witnessed by a small number of invitees.

“As the only item of heritage railway rolling stock now on public static display in the Bendigo area, this is an important asset for Bendigo as well as a great point of interest for the popular O’Keefe Rail Trail” said Cr O’Rourke.

This Link is to a video of the official opening that was carried out by Mayor Cr. O’Rourke.