What to do on cool yet sunny autumn Sunday in central Victoria? Well ten riders from the Mitchell Bicycle Users Group (MBUG) and ten riders from the Friends of the Bendigo-Kilmore Rail Trail headed out to ride all or part of a route between Heathcote and Rushworth.

The riders were able to experience the Heathcote-Graytown National Park, pass by Mt Ida, Mt Camel, and the Gobarup Nature Conservation Reserve, as well as through the Whroo Nature Conservation Reserve. As the planned morning tea location, the major attraction of the Whroo Historical Area is the significant Balaclava Mine, which is an open-cut mine in the now Australian ‘ghost town’ of Whroo. Mining in this open cut ceased in the 1920’s, yet the site remains a visual reminder of the former gold rush era.

Due to a timing issue (was it a head wind, or distractions on route?), unfortunately the two groups did not meet as planned to share a cuppa and Anzac biscuits at the Whroo Historical Area, yet Rushworth businesses definitely benefited as the group members enjoyed lunch at either the MotoFinish Cafe or the Rushworth Bakery in Rushworth. 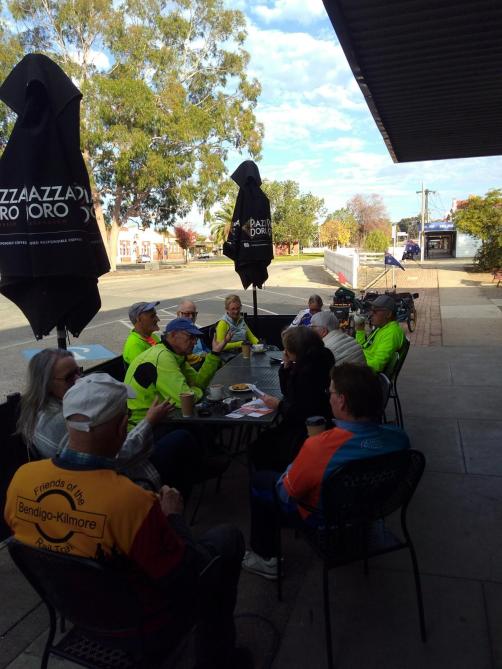 A good coffee and some home-cooked food was a great way to finish exploring this part of a proposed Heathcote to Murchison Trail, for which the Campaspe Shire Council is currently seeking funding for completing the current open section of the Waranga Rail Trail.