All lined up in a row, starkly painted white, yet with nowhere to go! What could these items be… futuristic headstones or links into history, totem poles of worship, maybe seafaring markers, mysterious sequenced numbers (seen from many angles), or perhaps a measure of human ingenuity from a past industrial age?

Friends members Ken Hanson and Garry Long with some of the new creations in the collection. 7 Jan 2016. Photo: Les Lewis

Are they modern representation of artefacts found from a lost ancient civilisation, like unexplained icons similar to those carved moai figures found on Easter Island? Could they be part of an upcoming exhibition, by a little known local artist, at the Bendigo Art Gallery that is expected to draw large crowds into this city of culture! 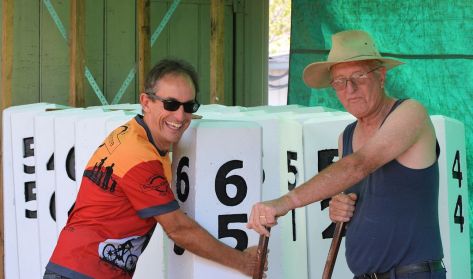 With over 70 of these items having been produced by Friends of the Bendigo-Kilmore Rail Trail’s ‘resident artist’ Ken Hanson, they have drawn quite a deal of interest when placed on public display.