Riding a bay trail and more!

Trail riding is part of the experience of being a member of the Friends of the Bendigo-Kilmore Rail Trail group. A social ride on the Hobsons Bay Coastal Trail was one such recent activity organised for the members.

Some travelled by train from Bendigo, disembarking with bikes at the Footscray station soon had them riding along the Maribyrnong River Trail towards Spotswood. Other members were being met at Spotswood, having arrived with bikes via the Westgate Punt Ferry. The day’s ride was an opportunity to experience a different type of trail, riding with Port Phillip Bay never too far away and at times the many sounds of Melbourne’s suburbs heard in the background. 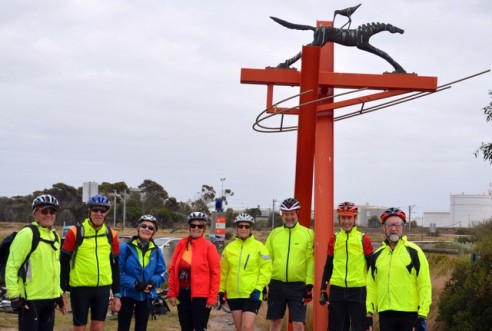 Following the trail from Spotswood, riders passed by Newport, Williamstown, Seaholme, Altona, Altona Meadows, to reach the end of the trail at Sanctuary Lakes in Point Cook. With the trail passing through the Altona Coastal Park, it was revealed that this was once the site of the Williamstown Racecourse with its magnificent 1872 grandstand that sadly burnt to the ground in 1947! Then whilst riding through Truganina Park, the bikes were parked so that all could climb the 100 Steps to Federation. 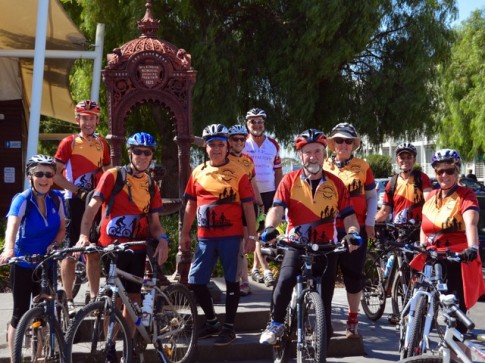 With lunch near Altona Beach enjoyed, it was a cruising ride back to Williamstown for a coffee and chat before catching the last Westgate Punt Ferry for the day as the next goal. The distant sounds of vehicles high above on the Westgate Bridge were heard, whilst all enjoyed the crossed of the Yarra River by punt. Some of the disembarked riders did a little clock watching, as they headed to catch a train at Southern Cross Station! The bikes loaded onto the train, with only minutes to spare, it was then time to rest and reflect upon a great Sunday’s trail ride with friends.

Like Loading...
Activities, Friends, Health and wellbeing
← Nature and a bridge caused headaches! A Trail of Two Tunnels! →