An award for Life!

It was a very surprised President who was awarded Life Membership of the Friends of the Bendigo-Kilmore Rail Trail at the recent AGM. Garry Long was presented with the award by the group’s Treasurer Colin Campbell, who spoke about Garry’s commitment within the community and to improving the O’Keefe Rail Trail. Colin also indicated how Garry’s encouragement of local people to be involved with cycling generally, and his leadership of this very active community group, were some of the reasons behind making the award. 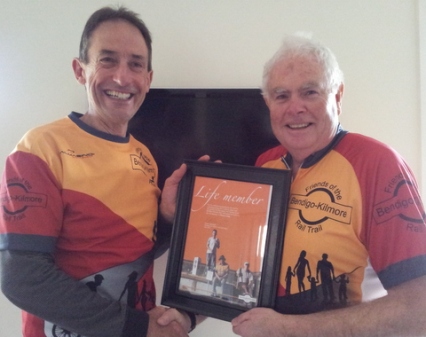 Being involved with the formation of the Friends group in 2009, Garry has held the position of President/Convenor for the past 5 years, and is very supportive for the group’s various activities. Upon receiving the award, Garry thanked the Friends members for the honour and said that the recognised impact that the group has had in the community, plus its various achievements over the past 5 years, were a credit to the involvement of the many passionate individual members.

Garry also made reference to the City of Greater Bendigo Council, for its commitment to upgrading and extending the O’Keefe Rail Trail, a community asset that is destine to become a high quality and popular rail trail for the benefit the local economy plus the health and wellbeing of the community.